LL-37 is the only known human cathelicidin, which is a large protein family with diverse function. These peptides, which are primarily found in macrophages and polymorphonuclear leukocytes (both types of white blood cell), are important for killing bacteria, but have been found to have other dramatic effects as well. The entire class is often referred to as antimicrobial peptides (AMPs). LL-37 has been found to play important roles in autoimmune disease, cancer, and wound healing.

LL-37, while primarily billed as an antimicrobial peptide, actually plays a role in a number of inflammatory diseases such as psoriasis, lupus, rheumatoid arthritis, and atherosclerosis. Depending on the local inflammatory environment and the particular cells involved, LL-37 has several different immune system modulating behaviors. It has been found to:

alter chemotaxis of neutrophils and eosinophils,

Interestingly, LL-37 does not affect the immune system in the same way all of the time. Research in cell culture has shown that the inflammatory environment affects how cells of the immune system respond to LL-37. T-cells, for instance, will increase their inflammatory actions in response to LL-37 when they are not activated but decrease inflammatory action when already activated[2]. It appears that LL-37 has potent homeostatic effects, helping to balance the immune response and prevent it from becoming overactive in the setting of infection. These findings would suggest that LL-37 could play a role in helping to regulate the unchecked inflammation of autoimmune diseases. This may explain why there has been a strong correlation between LL-37 levels and autoimmune disease. It was previously thought that LL-37 might be causing autoimmune inflammation, but more recent evidence suggests that high levels of LL-37 in autoimmune disease may actually be preventing more fulminant inflammation. 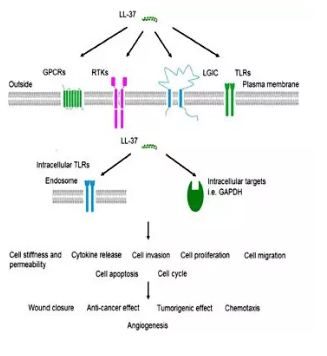 LL-37 Is a Potent Antimicrobial

LL-37 is part of the innate immune system and as such is one of the first pieces of the immune system to be activated during infection. Research in skin infections suggests that normal skin has very low levels of LL-37 but that the peptide accumulates rapidly in the presence of invading pathogens. The peptide has been shown to work in tandem with other proteins, like human beta-defensin 2 to combat infection[3].

LL-37 primarily works by binding to bacterial lipopolysaccharide (LPS), a major component of the outer membrane of gram-negative bacteria. LPS is a critical component of membrane integrity in these bacteria. The ability of LL-37 to bind to and interfere with LPS means it is exceptionally deadly to certain bacteria. There is interest in using the peptide exogenously to treat serious bacterial infections in people[4].

Despite the fact that LL-37 acts on the cell membrane components of gram-negative bacteria, it still has potent gram-positive effects as well. This could make it a beneficial treatment for staph infections and other serious bacteria. In vitro research indicates that LL-37 enhances the effects of lysozyme, an enzyme responsible for the destruction of gram positive bacteria like Staph aureus[5].

LPS, as mentioned above, is not unique to bacterial cell walls. It is found in a number of different organisms and, in some cases, becomes airborne when an environment is contaminated by mold or other fungi. When LPS is inhaled, normal lung tissue responds by producing. Unfortunately, the response is often inadequate to prevent toxic dust syndrome and the pathogenesis of respiratory diseases like asthma, COPD, and more. Research into the use of LL-37 as an inhaled treatment for toxic dust syndrome is currently under way[6].

One of the interesting findings of research into the effects of LL-37 on lung disease is that the peptide promotes epithelial cell proliferation and wound closure. It appears that one of the primary properties of LL-37, at least in the lungs, is to attract airway epithelial cells to the site of injury and promote both wound healing and the growth of blood vessels necessary for providing nutrients to the new tissue. It seems that LL-37 is an important homeostatic regulator in the airways just as it has been found to be a homeostatic regulator of immune function[7].

Research in rats indicates that LL-37 is found in high concentrations in joints affected by rheumatoid arthritis. In particular, the peptide appears to be associated with the pathological events of arthritis. It isn’t clear, however, if the peptide is causative or its up-regulation in these joints is a part of the body’s attempt to control the pathological process[8]. Several things, however, suggest that LL-37 is beneficial in inflammation and not causative.

First, there is no evidence that LL-37 or any other cathelicidin is involved in the pathogenesis of inflammatory disease. This does not rule the peptide out as being causative, the but evidence weighs pretty heavily against that being the case. In particular, LL-37 deficiency does not affect outcomes in animal models of arthritis or lupus. In other words, animals without LL-37 experience the same pathological progression as animals who have the peptide. Based on these findings, scientists have suggested that reactivity against cathelicidins in arthritis is likely an epiphenomenon that results from extensive over-expression of the peptide in inflamed tissues[9]. In other words, it is incidental.

Research in mouse models of arthritis indicate that peptides derived from LL-37 confer protection against collagen damage that often occurs in inflammatory arthritis. Administration of these peptides directly to affected joints decreases the severity of disease as well as serum levels of antibody against type II collagens[10]. Based on this study, it is reasonable to speculate that LL-37 probably has protective activity in arthritis, which could explain its high concentrations in tissues with substantial inflammation. This speculation is supported by the fact that LL-37 and its derivatives have been shown to regulate inflammation caused by interleukin-32, a molecule that has been directly associated with severity of inflammatory arthritis[11].

Arthritis has also been associated with an up-regulation of toll-like receptor 3 in the fibroblasts of synovial fluid, a factor that likely aggravates arthritis by increasing inflammatory cytokine levels[12]. LL-37 has been shown to bind to TLR4 and either promote pro-inflammatory or anti-inflammatory effects. Which it does in the setting of TLR3 up-regulation isn’t clear, but research is ongoing. The idea that it might reduce inflammation selectively is not unreasonable given that LL-37 has been found to selectively reduce pro-inflammatory macrophage responses in the past[13].

LL-37 and the Intestine

Research in cell cultures indicates that LL-37 has several effects in the intestine. First, the peptide increases migration of cells necessary for maintaining the epithelial barrier of the intestine. Second, LL-37 reduces apoptosis in the setting of intestinal inflammation, helping to slow the pathogenesis of a number of inflammatory conditions. Overall, the research indicates that LL-37 may be a useful adjuvant treatment in inflammatory bowel conditions, following intestinal surgery, or in the setting of acute intestinal infections. It may even prove useful as an adjuvant to antibiotic therapy, helping to prevent the GI side effects that often limit oral antibiotic use[14].

LL-37 does not work alone in the intestine, pairing once again with human beta defensin 2 to promote wound healing. Research in cell culture indicates that the peptides work in tandem to both repair and maintain intestinal epithelium while reducing TNF-related cell death[15]. Currently, TNF-alpha inhibitors are a mainstay of treatment for inflammatory bowel conditions. They are effective drugs, but have a number of serious side effects including causing a drastic increase in the risk of serious infection, such as tuberculosis. The development of LL-37-based treatments of inflammatory bowel disease could help to reduce reliance on TNF-alpha inhibitors and improve morbidity and mortality in this patient population.

Research regarding LL-37 and cancer has produced mixed results, but the peptide appears to be beneficial in the setting of intestinal and gastric cancers, including oral squamous cell carcinoma associated with smoking and tobacco use. Interestingly, these effects appear to be mediated by a vitamin-D dependent pathway, which may explain why taking the vitamin has been previously associated with a reduced risk for GI cancer. It appears that vitamin D induces the anti-cancer activity of tumor-associated macrophages via LL-37[16].

LL-37 appears to trigger the synthesis of prostaglandin E2 (PGE2) in endothelial cells. PGE2 is associated with both inflammatory pain and with the growth of blood vessels, but these effects differ based on where the molecule is being expressed. In endothelial cells, PGE2 triggers the development of blood vessels in a process called angiogenesis[17]. This can be both good and bad, depending on the particular setting. The ability to regulate angiogenesis has been the focus of much research in the last several decades because it impacts cancer development, heart disease, stroke outcomes, wound healing, and more. LL-37 activity offers a useful means for probing the angiogenesis pathway as well as a model for potential future interventions to both promote blood vessel growth when needed (e.g. heart disease) and discourage it when it is detrimental (e.g. cancer).